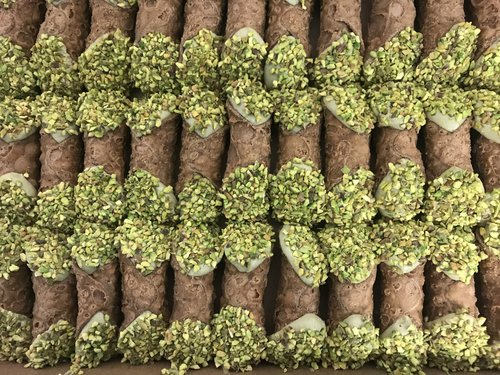 Casa Cannoli started from the simple observation that it was difficult to find a good cannoli in London.

Having grown up in Sicily and knowing what goes into making this traditional pastry, we were confident that by recreating the authentic experience of eating one, people would fall in love with them.

At Casa Cannoli we freshly fill cannolis using the highest quality ingredients, most of them imported directly from Sicily but also from other parts of Italy.

Pistachio from Bronte at the foot of the mount Etna in Sicily and Piedmont Hazelnuts from the North East of Italy are just two of the DOP certified ingredients we use for our cannolis.

Our ricotta -the crucial ingredient- is sourced from Palermo in Sicily and is made entirely of sheep's milk as per tradition.

To make our concept unique, as well as producing the traditional cannoli in its classic recipe we also create our own flavours, most of which are inspired by Sicilian tradition. We also boast a range of contemporary recipes for special occasions and holidays.

We are gradually introducing other Sicilian specialties that deserve attention for their uniqueness and authenticity such as sweet pistachio and almond spreads, hand-made soft baked almond cookies, dark chocolate from Modica, Sicilian desserts such as cassata and many more.

We’re bringing Londoners a little piece of Sicily on their doorstep.

The History Of Cannoli

Cannoli originate from the Palermo and Messina regions of Sicily and were historically prepared as a treat during Carnevale season, possibly as a fertility symbol; one legend assigns their origin to the harem of the town of Caltanissetta. The dessert eventually became a year-round staple throughout Italy.

Cannolis are traditionally filled with sheep's ricotta although many variations are found around the world. This delicacy is best enjoyed straight after being filled and Casa Cannoli are known for making the freshest available.