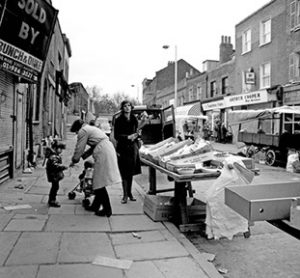 The demise of an old established shopping street and it’s immediate community isn’t always sudden: When local councilors or officials don’t live in or ever visit the hidden corners of their own borough, seeds of decay start to settle; in the case of little-known Broadway Market, long-term neglect seemed to result in inevitable demolition – A common attitude post-WW2.

For many generations before 1970, this was one of the most thriving markets in East London, but by being isolated when new shopping habits evolved and the vast supermarkets opened, it suffered the most serious collapse. Only a handful of street-traders remained, selling from their traditionally painted barrows. Loyalty went out of the window when one-stop-shopping replaced individual queuing. Turnover had plummeted and rented shops were abandoned in anticipation of demise. These were no more than temporary coffins, clad in corrugated iron, and waiting for their demise.

After a decade of uncertainty, the GLC proposed to

demolish Broadway Market for a ‘motorway-feeder’ route to and from the Blackwall Tunnel. This was an even bigger shock, anticipating a completely divided community with separated family connections.

Two young shopkeepers in Broadway Market, namely Stuart Goodman and Stephen Selby, recognised the potential of their surroundings and arranged to meet GLC chief Norman Brookes-Partridge at County Hall, to make a case for saving the market.

These two set up the Broadway Market Action Group and organised a carnival with decorated floats and drum majorettes. Every shop-keeper and members of staff were adorned in Victorian fancy dress and the whole community was invited, together with three local MP’s who came along to represent the local anxieties. The policemen, as always present for such occasions, were photographically decorous wearing their full dress uniforms.

By approaching this challenge with reason with not-inconsiderable emotion, …….Broadway Market was saved! But for what unknown destiny? 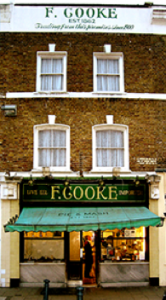 Ironically, the GLC itself was terminated in 1986, passing on all their properties for a mere peppercorn to Hackney Council, sadly without a supporting budget for repair. Hoping for refreshed vigour, a few shops were re-opened, but the street limped on with little impetus or financial backing of the Council.

Asking two visiting council officers whether they lived in Hackney, their combined retort was; “We wouldn’t dream of living in a dump like this”!
In the early 1990s The Broadway Market Traders & Residents Association (BMTRA) was formed to help revive this little ‘oasis’ that no-one bothered to visit. Saturdays the traditional big shopping day were particularly bleak; local residents now preferred to shop at Tesco’s in Morning Lane. Our market was empty so we needed to bring back the stall-holders and restore the dilapidated shops. 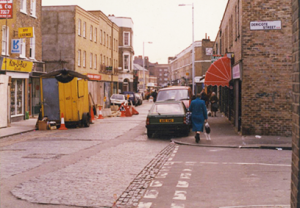 Hackney’s Regeneration Dept. (Renaisi) invested in an office and personnel to give the place a boost; a new “Flower Market” was formed and managed by LBH in the background, but this had been delegated to the competition who ran the Columbia Road Flower Market! Sadly this ‘new’ flower market closed within 12 months. The whole idea had been in direct conflict and bound to fail before it started.

In 1996, about eight years before the Saturday Market opened, Hackney Council was instructed by Government to sell off Broadway Market’s ex-GLC ‘peppercorn’ freeholds. LBH decided to tender several large blocks of properties to developers, as well as auction off some of the buildings to selected tenants. A few large developers ‘risked’ their tiny investments, and were provided with grants to restore dilapidations. This was to be the last act here of LBH Regeneration.

Hackney Market’s Dept., with its new chief Peter Robertson? during the last few years of the 1990’s, invited the London Farmers Market (LFM) to set up a food market.

Conflict with the Ridley Road Market traders, worried that competition would affect them, restricted LBH ambitions; added to which, the LFM insisted on clearing their own rubbish, shutting out the Borough Waste Dept. Yet another three years of delay following the Flower Market fiasco, was too much for everyone. Hackney Regeneration LBH (Renaisi) finally closed its office – property developers had received their contracts but were left without a commercial plan for a street market.

Hackney Council had spent time and vast funds; (which must have amounted to a small fortune,) in attempting to set up an effective open market place. In march 2004 the local community was at last provided with the opportunity of creating their own non-profit-making market.

Broadway Market Residents and Traders Assoc. (BMTRA) stepped in with a positive idea; to create a high quality market, and not in conflict with anyone. LBH eventually, in May 2004 effected the road closure. Twenty five years had passed between saving the fabric of this once great street market, and reopening it with a proper street market!

Ironically, it took BMTRA only three weeks to sign up the first 49 interested traders from Borough and Spitialfields Markets, Camden Passage and Stoke Newington, to commit joining into this new market revival. The first market-day was remarkably successful and in just 14 years, now consists of more than 150 traders. In fact demand for a stall-pitch is so great that the waiting list is presently closed. BMTRA has the cheapest stall rents in London and has donated many tens of thousands of pounds to local charities and amenities.

Moreover this has been the finest place for young entrepreneurs, and is so successful for many traders that most never want to leave.

Now that our Saturday Market has become “…. a fashionable place to visit; both as a social venue and a great shopping experience”. Many of the incumbent retail shops, bars and restaurants enjoy the benefits proportionately, matching the high quality of the Saturday stall-holders. They are equally inspirational and have helped turn Broadway Market into one of the most sought-after locations in London.
Stephen Selby